Some kids know their politics.   Yesterday, an astute sixteen year old saw the political opportunity and he bravely took it.

Prime Minister Julia Gillard yesterday was again spruiking her lies and deceit out in the suburbs, at Marsden High School in south Brisbane, when 16 year old Kyle Thomson lopped his Vegemite sandwich at her.

The witch was greeted with shouts of “loser” as she arrived.  Only problem is that the sandwich missed its target. 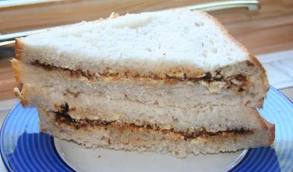 The frustration of the lies, broken promises and incompetence of Gillard and her loser government is palpable.

No wonder voters are throwing sandwiches at her.  That it was a Vegemite Sandwich is more particularly Australian, even though Labor allowed the iconic Australian brand to go overseas like most of our manufacturing.

Another week, and other broken promise by the Gillard.  This week it is those promised household allowances to be withdrawn.  Sorry, we’ve blown out accommodating illegal boat people by $5 billion – foreigner invaders come before Australian families.

Gillard’s promised  $1.4 billion in cuts scheduled for 2015 are now to be dumped, or in McTernan speak ‘deferred’.

Gillard’s promise that there would be no carbon tax in a government I lead promise of hundreds of millions of dollars to go to fund hospitals and schools has failed as the Gillard Carbon Price has crashed from the false promise of $29 a tonne to now $4 a tonne.

So yesterday she broke her promise to pay tax cuts from 2015 as compensation for her carbon tax.   Gillard’s Mining Tax revenue promise is similarly a dismal failure. 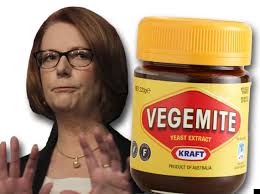 A PM deserving to be Vegemited

Gillard’s budget surplus promised for this year hundreds of times is now set to be a $20 billion deficit and worsening daily.  It will be Labor’s sixth straight deficit.

This clown show called the Gillard Government deserves Vegemite Sandwiches thrown at it.