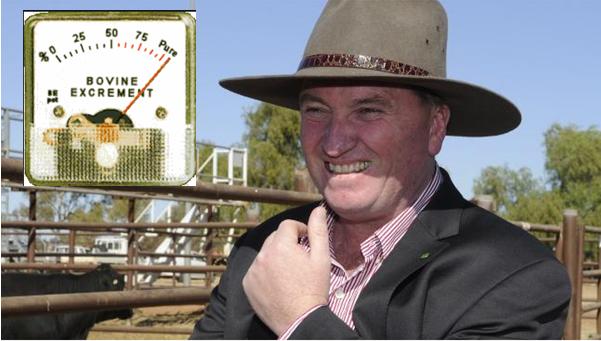 Beware Free Traders bearing gifts.  While a few vocal elites will selfishly benefit in the short-term, tens of thousands of Aussie workers and producers won’t be able to compete with the cheaper foreign dumping, so forcing structural unemployment.

Nationals new leader, Barnaby Joyce (farmers call him ‘Barney’), spruiks that our red meat industry is worth $20 billion to the Australian economy.  But it is already viable domestically. As Abbott’s lap dog Agriculture Minister, Barney claims he endorses Australian agriculture as “a critical moral and economic activity that underpins the national interest.”  But then he lets the Libs’ free market idealism overrule.

Read our article of September 2013:

Corporate greed compounds growth. It wants more and more industry control (market share) though more sales. Exporting facilitates this.  They buy out competitors.   It’s big fish eating little fish syndrome.   And actually it’s what Free Trade is all about on a global scale.

Case in point – one of Australia’s biggest corporate Red meat exporters Sanger Australia (a meat and sales marketing middleman) says it is excited by the opportunities in online trading into China.  Sanger has got really big, merging with Bindaree Beef Group, and is now exploring a more integrated supply chain.   The Bindaree Beef Group is Australia’s fifth largest beef processor with capacity to churn 1300 head of cattle a day through its abattoirs.  It made $570 million from sales in 2014.

Bindaree Beef is very vocal in lobbying politicians like Barney. 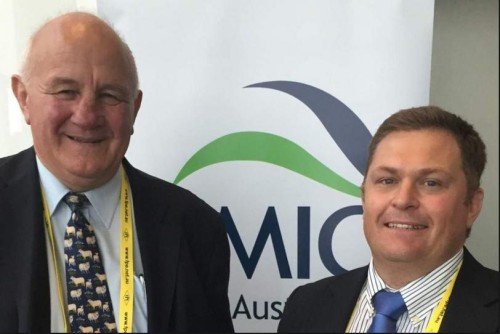 A few elites benefit from free trade with the Chinese, until the Chinese own our farms…

“The Free Trade Agreement with China is going to be the most important one we have done for 30 years,” he said.  “[China] mightn’t take the most meat but it is vital, it takes the cuts other countries don’t handle so well. This thing must go through.”

According to BRW’s published Rich List in 2011, Roger Fletcher has a personal worth of $250 million.  He’s not exactly needing exports and Free Trade overseas to stay afloat. But he is very vocal in lobbying politicians like Barney.

And corporate organic beef exporter, OBE Organic, continue to list the US as its biggest customer.  OBE’s Dalene Wray, said while US quota restrictions present a challenge they also presented opportunities.  “There is profit to be made in organic beef and we want to help producers thrive.”

But it depends on who the Nationals choose to talk to about ‘Free Trade’ so-called.  It’s cheaper for big corporate exporters to export overseas, but it there’s a catch – it means foreign corporates much bigger than Australia’s can dump their products in Australia making Australian producers paying decent Australian wages uncompetitive in our own country.

‘Free Trade’ is a political catch cry.  Labor’s John Button started it off under Hawke in the 1980s, destroying Australia’s then profitable domestic car industry and then he did a runner.  Now the Liberal Coalition’s Andrew Robb has done pretty much the same, only worse – allowing Third World China, South Korea and Japan to dump their produce on Australia. 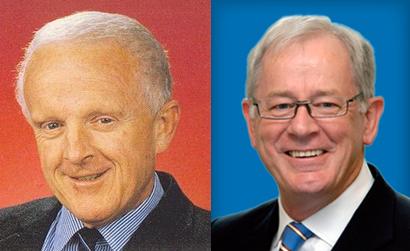 Nothing is free.  It certainly isn’t fair to expect Australian producers and employers to compete on a Third World level playing field and earn a decent income.  Australia’s costs are structurally higher than the Third World because we don’t allow slaves to work in sweatshops here. 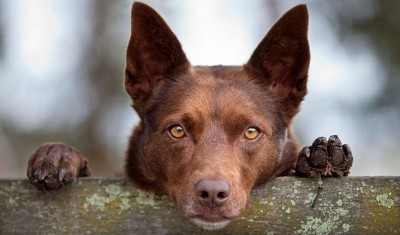 But ‘Free Trade’ so-called is globalism that benefits only the already wealthy elite to export more.

China’s deal offered to farmers and professionals promises billions in new markets for Australian corporate exporters, but who are these exporters trying to kid? 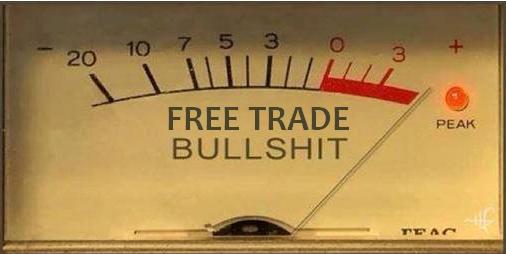 In its trade agreement with Australia, China has agreed to open up sectors like beef, dairy and grain because it cannot satisfy domestic demand without imports.  But the deal is only temporary.  China is buying Australian farms and processing plants so that eventually it won’t have to buy from Australian exporters, because it will own the farms in Australia. 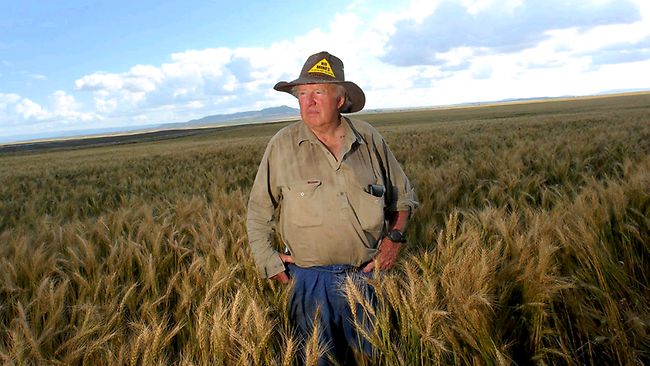 Foreign investors continue to snap up tens of billions of dollars of Australia’s prime agricultural land and rural enterprises – and no one is keeping watch.  Foreign state-backed corporates from mainly China, the Middle East and Singapore are securing food supplies for their own populations.   Australia’s Foreign Investment Review Board is as useless as tits on a bull, if not completely corrupt.

Some of Australia’s best known farm brands – including Golden Circle, SPC, Dairy Farmers, CSR Sugar, SunRice and AWB – have already fallen into foreign hands.  More than $9 billion of prized agricultural assets have been sold to offshore interests in the past two years alone.

Independent Senator Nick Xenophon argues “the present rules around foreign investment are a joke. No one is even monitoring how much of our farmland we are selling.” In 2010, he along with Greens’ Christine Milne, introduced a private member’s legislation to reduce the price threshold of foreigners acquiring Australian agricultural land from beyond a staggering $231 million to a more accountable $5 million.  WA Farmers president Mike Norton said at the time “the average value of Western Australian properties is between $1 million and $10 million. So you could sell off the whole of the Western Australian agricultural sector and not trigger the interest of the [Foreign Investment Review Board].”  In Western Australia for instance, the ABS reports that 7 million hectares of land has some form of foreign ownership currently, which equates to 13 times the size of the Perth Metropolitan area.

But Labor and the Libs with the Nats (including Barney) rejected the legislation justifying their decision as one of economic growth at any cost – “crucial to ensuring our continued economic growth and prosperity”.

On the flip side of Free Trade, the dumping of cheap Chinese goods is fast killing off Australia’s manufacturing sector. Just ask the workers whose livelihoods are at risk.  The Liberal-National Coalition Government in Australia has given ground on labour, agreeing to a new case-by-case mechanism for Chinese investors to apply to bring in workers at Australian wage rates in areas of skills shortages.

Unions NSW secretary Mark Lennon said he was concerned about the impact of the free trade agreement with China on manufacturing in NSW following major job losses in western Sydney and the Hunter.  “Any weakening of anti-dumping measures that could result in the market being flooded by cheap imports is a concern,” he said.  “We are concerned about any proposals that would allow Chinese companies to bring in their own workforce at the expense of jobs in NSW.”

Australia’s biggest aluminium extrusion plant, Capral Aluminium, near Ipswich, 40 kilometres west of Brisbane, had state of the art plant when built in 2004 at a cost of $160 million.  Then, Capral made 60 per cent of all the extruded aluminium sold in Australia. It is still the biggest domestic producer but its market share has crashed to 30 per cent.  Ten years later it operates at less than 60 per cent capacity. The workforce is down to 300, a loss of 150 jobs in five years. Nationwide, almost 800 positions have gone. 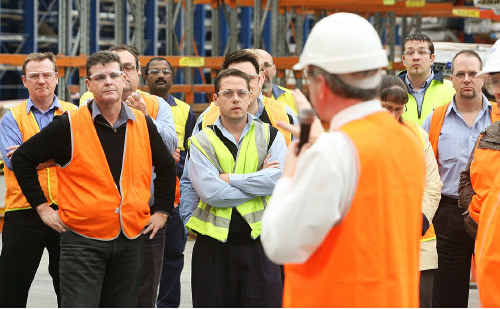 Every Australian maker of aluminium extrusions and finished products is struggling. All blame predatory competition from China, the world’s biggest aluminium producer. They claim it is dumping product at below the cost of production, in breach of world trade rules, in order to drive Australian companies out of business and control the market.

“It is easy to dismiss us as inefficient manufacturers looking for an easy ride,” says Capral director Phil Jobe. “But if mainstream Australia knew what long-term damage dumping is inflicting on Australia’s industrial base, they would be outraged.”

At Ullrich Aluminium, a Capral competitor, CEO Gilbert Ullrich estimates that Chinese imports have grabbed 55 per cent of the market for extruded aluminium, worth more than $1 billion annually. “You don’t get that in just a few years by playing by the rules,” he says. Ullrich fears that the jobs of his 325 Australian employees are “clearly at risk” from dumping. “I believe in free trade but also fair trade. Once the Chinese take over the sector, they will put their prices up.”

Across a wide spectrum of industries, unrestrained imports are killing Australian manufacturing.

The issue goes beyond dumping to include imports that fail Australian quality and safety standards and come with fraudulent labels and certificates. China is the main offender. “It’s a nightmare and it’s getting worse,” says Tracey Gramlick, chair of the Building Products Innovation Council. “Many Australian manufacturers are closing down because they can’t compete.”

Sheets of imported glass crack and fall off Canberra’s new ASIO HQ; Chinese electrical cable is declared a fire risk, requiring up to 40,000 homes to be rewired; inspectors shut down a Sydney unit development over dangerous, imported formwork plywood; hundreds of tonnes of inferior gantry steel from China are sent for scrap at a Melbourne freeway project.

Manufacturers supplying the building and construction industry are among the hardest hit; 45 per cent of them tell the Australian Industry Group (AIG), a major employer lobby, that “non-conforming” products are hammering their revenues, margins and employment levels. “This issue is affecting the very viability of legitimate businesses. Jobs are being lost now and we are seeing a downward spiral of product quality and conformity,” warns the AIG.

Manufacturing’s plight is the flip side to the excitement generated by Australia’s deepening commercial engagement with China. The first Australia-China free trade agreement (FTA), signed in November, would “set Australia up for the decades ahead”, declared Trade Minister Andrew Robb. While commentators gushed over concessions apparently granted to Australian service industries – banks, insurers, lawyers, architects and education providers – and some farm sectors, the agreement also kicked away the remnants of a tariff regime that nurtured Australian manufacturing.

“The FTA will benefit low-employment agriculture and mining while destroying jobs in high-employment manufacturing,” warns Tom Skladzien, economic adviser to the Australian Manufacturing Workers’ Union (AMWU). This concern is reinforced by employer sentiment: an AIG survey finds just over half of all local manufacturers expect to be hurt by the removal of tariffs. Only 11 per cent believe they will benefit from cheaper imported components and raw materials.

Australian Manufacturing Workers Union National Secretary Paul Bastian said any removal or weakening of anti-dumping, countervailing and safeguard measures is set to flood Australian markets with cheap imports.  “This will put even more pressure on our manufacturing industry already facing an uneven trading environment in which China heavily subsidises many of its industries through currency manipulation, exploitative working conditions and behind the border trade barriers,” Mr Bastian said.

In late 2011, the Liberal-National Coalition’s then opposition industry spokeswoman Sophie Mirabella promised companies like SPC Ardmona and McCain an Abbott Government would force companies importing foreign foods to Australia to prove their goods were not dumped. This was opposed to current laws where local companies have to prove foreign goods are dumped.

In opposition the Coalition had promised food processors and growers they would toughen anti-dumping laws to help create a level playing field for local growers and manufacturers against imported goods sold at below cost price.

Then in government Industry Minister Ian MacFarlane has admitted the Federal Government will not keep its election promise to toughen laws over foreign food imports.  On October 22, 2014, MacFarlane told the National Press Club in Canberra, the government could not fulfil that promise under World Trade Organisation rules. 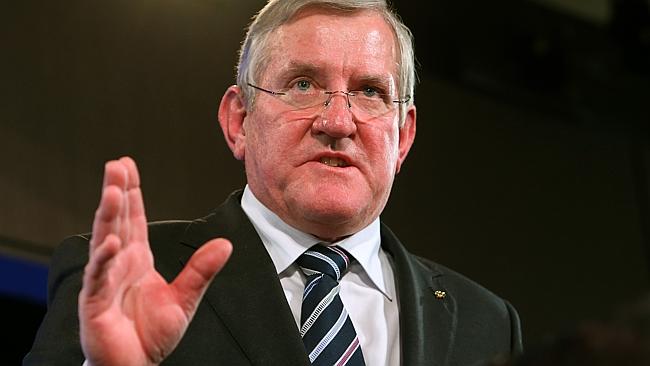