Ordinary Australians and Americans alike have had a gutful of political correctness and the scripted bullshit of the Establishment Elite entrenched like rising damp, in Canberra and Washington. 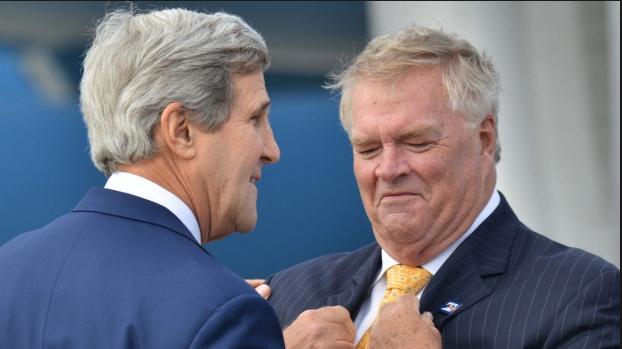 In a rare honest look at political reality by the Australian Broadcasting Corporation, we access a frank audio by Radio National’s ‘Between the Lines’ programme aired last Thursday April 7, 2016.  Former Labor leader Mark Latham (inset below) reflects on the rise of Donald Trump and his frank exposure of political correctness and why so many Americans and Australians have had a gutful of the bullshit and lies spun by the “political insiders – the lying snakes of machine politics and media manipulation and their hawkish neo-conservative worldview“.

It’s been going on since probably World War II on both sides of establishment politics in both the US and Australia.

“..By invading Iraq, Bush created more terrorism than he ever destroyed; the work of a third-generation dud from a privileged political dynasty.

In 2012 Romney ran as a dithering upper-class twerp, weakly conceding a second term to Barack Obama.

In Congress, “respectable” Republicans have been ineffective in combating the debilitating impact of identity politics, dividing the United States on the basis of race, gender and sexuality.

The Republican base has been baying for a red-meat candidate, a straight-talking, authentic, politically incorrect hard man — and Trump has given them what they want.

He has advocated bold solutions to longstanding problems, such as illegal immigration and deficit budgeting, backed by his personal story in building a lucrative business career.

Why shouldn’t they support a successful, down-to-earth candidate who talks their language and shares their values? The more the media attack

Trump as “mad” and “erratic”, the more his supporters dig in, rejecting the politics of demonisation.

The US electorate has seen enough of political correctness to know it’s a con-job: an attempt to narrow the scope of public debate and lock out millions of voices of suburban commonsense.

Voters are starting to realise that terms like “mad” and “erratic” are code for saying: “We, the establishment, don’t like this guy because we can’t control him and he might upset the vested interests that currently control Washington.”

The elites have thrown everything at Trump and he’s still standing — a rallying point for the anti-PC cause.

As the Republican Senator Marco Rubio acknowledged in the dying days of his presidential bid, “I know that a lot of people find appeal in the things Donald says, because he says what people wish they could say.”

In truth, the greatest freak show in the American primaries has been Hillary Clinton, especially last month when she started barking like a dog at a rally in Nevada.  She once described her husband Bill as “a hard dog to keep on the porch” and now she’s imitating one.  When it comes to tolerating vulgarity, no one beats Mrs Clinton: hanging on to a husband, who famously perfumed his Oval Office from cigars with the scent of Monica Lewinsky.

Across the political class, the attacks on Trump’s manners reek of hypocrisy.

Behind the scenes, in the United States and Australia, journalists and politicians can be as rough as guts — no less so than The Donald.

As Niki Savva’s book on Tony Abbott and Peta Credlin demonstrated, much of the insider talk in Canberra is gossipy and salacious.

For many years on the Labor side, Kevin Rudd had the electorate conned into thinking that he was as homely and innocent as the Milky Bar Kid.
Then the video of his ranting meltdown at a Chinese interpreter went viral and the real Rudd was exposed.

During my time in parliament, I recall an excitable journalist who loved nothing better than cruelly denigrating colleagues and spreading rumours about extramarital affairs in the press gallery.

Since then, this malevolent influence has become a high-profile, multimedia personality, lecturing the nation on the need for civility — a breathtaking hypocrisy.

These are the two faces of modern politics: privately slagging off at one’s rivals, while using media platforms to call for higher standards.
At least Trump only has one face: an energetic, bombastic talking machine who speaks frankly about the things he believes in.

The Donald is by no means perfect but I much prefer his approach to the lying snakes of machine politics and media manipulation.

From an Australian perspective, there’s another sound reason to ignore the hysterical clamour about Trump.

“America can’t be the policeman of the world”, he says.  “We have to rebuild our own country.”

This is a return to the Republican tradition of opposing foreign adventurism — a belief that the US should spend more time minding its own business.

Trump has been highly critical of Bush and the neo-con invasion of Iraq, which resulted in the death of 4500 American servicemen and the rise of Islamic State — a truly vulgar outcome.

If he keeps his promise, a Trump presidency would mean no more fiascos like Vietnam and Iraq, sparing young Australian lives from the futile killing fields of US-led invasions.

Far from being a dangerous warmonger, Trump has a clear-headed appreciation of his country’s best interests — and ours.”