OUR BLACKTOWN CAMPAIGN: SUBTLE ATTEMPT TO SMEAR? YET THE VOTE SCORE GROWS…

Subtle innuendo against our lead candidate, Cassie Orrock, seems the order of the day. 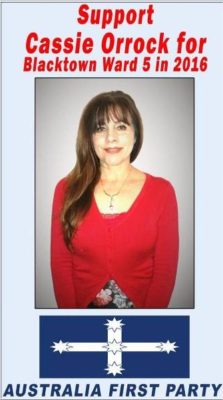 Of course it’s by leftist-globalist Fairfax Media empire and its love affair with anything foreign, such as the foreign-aligned Labor Party. Most of Fairfax Media’s regional advertising revenue is derived from local councils.  That is why Fairfax’s Blacktown Sun is the voice piece for the Labor dominated Blacktown Council.  That the council has a history of corruption has never bothered Fairfax. Recall the missing $452,000 of ratepayers money that went to a Chinese interpreter, and the annual $129,000 sister city councillor junkets to Liaocheng?

Nonetheless, nationalists note that the message gets through as it always does!  There is a growing interest in what Australia First Party is saying in Blacktown.  Locals are listening to Cassie Orrock. 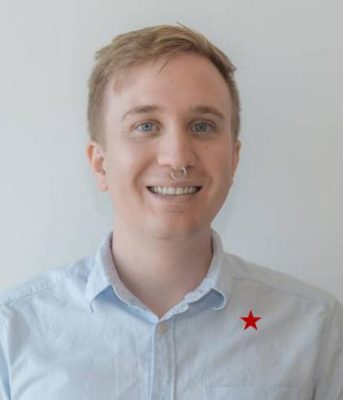 Ms Orrock is leading the nationalist party’s ticket in Ward Five, where it has campaigned previously.

The candidate, who is married to former Nomad bikie gang president Scott Orrock, said she is mainly concerned with “the influx of refugees” and the lack of affordable housing.

“The west has become no longer viable as a cheaper alternative to the expensive inner city,” Ms Orrock said.

“The idea that property developers can build ad hoc high rise buildings for people to live in, especially for future immigrants only, has no place in a community that needs better planning for a sustainable future.

“We need a policy to circumvent any further refugee settlements in the Blacktown area.”

Ms Orrock acknowledged her party’s message would not appeal to the majority of residents in a multicultural area like Blacktown.

“Obviously, our appeal is either to persons of European culture or similar mindset and a growing quantum of Aboriginal opinion,” she said.

“We live in a country where our leaders are attempting to camouflage our Australian identity.”

Ms Orrock, whose full name is Lili Cassandra Orrock, formerly went by the name Lili Chel. She attracted media attention in 2010 while she was the owner of Kings Cross nightclub The Rouge.

The candidate was fined by the City of Sydney for breaching her liquor licence and the council’s development consent.

Aside from the Australia First Party, there are three major parties and four independent candidates jostling for position in Ward Five.

The western ward has traditionally been a Labor stronghold but is in for a shake-up.

Councillor Charlie Lowles is not returning and deputy mayor Jacqueline Donaldson, twice elected to the ward with the Liberal party, is moving to Ward Four as an independent.  (More disaffected Libs)

The Greens are top of the ballot paper, with Mount Druitt resident Antony Lewis leading the ticket.

The party’s big-budget plans include bringing back the Whalan Reserve ‘mega park’ plan, doubling the number of council rangers, and spending an extra $500,000 a year maintaining small shopping centres. 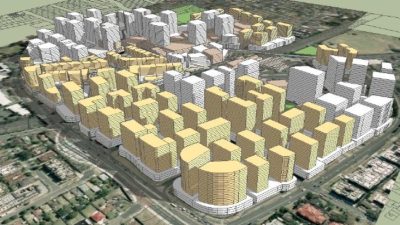 Labor’s AAA rated vision for Blacktown and Mt Druitt – Asians, Africans and Arabs…Blacktown’s population is expected to rise from 340,000 to 540,000 by 2036 – none of them Australian!

The group is primarily concerned with public transport facilities, including bus shelters and train station access.

They would also like to make more parking available at Mount Druitt Hospital for less cost to visitors.

Ziya Zarifi is running alone, campaigning for “an empowered and inclusive community”.

Mr Zarifi has been consulting with organisations including the Turkish Community Association and The Australian Arabic Association of Western Sydney.” 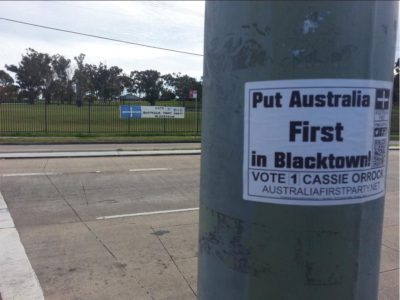 Reports from pre-poll suggest a steady stream of votes directed for Australia First Party in Ward 5. 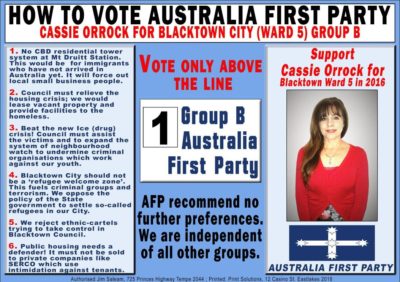 This would be for immigrants who have not arrived in Australia yet. It will force out local small business people.

2 . Council must relieve the housing crisis

We would lease vacant property and provide facilities to Aussie homeless.

Council must assist the victims and to expand the system of neighbourhood watch to undermine criminal organisations which work against our youth.

4. Blacktown City should not be a ‘refugee welcome zone’

This fuels criminal groups and terrorism. We oppose the policy of the State government to settle so-called refugees in our City.

5 . We reject ethnic-cartels trying to take control in Blacktown Council.

It must not be sold to private companies like SERCO which use intimidation against tenants.